Life is stressful as it is. With the addition of an ailing U.S. economy and the emergence and spread of swine flu, I think my stress level is heightened. And to think that the media loves to sensationalize the news, I am right yet again to avoid reading the newspaper or watching the news. On Monday, I was irritated to see a newspaper with the front cover featuring a woman wearing a mask and on the side is a big chart of how many people were infected in each state, in bold, CAPITAL letters. I was close to snapping like a twig. This type of publicity only encourages hysteria and panic to an already stressed population. I know it is very important to be aware on current events and to be a well informed citizen, but sometimes, the media (some) tend to forget their responsibility - to report and write the exact news - not to sensationalize and exaggerate in order to sell. As a citizen, I demand RESPONSIBLE JOURNALISM. (I needed to get that out of my system.)

Work has been keeping me busy. I'm just glad this week is half way through, and I should be singing "Friday I'm in Love" soon. I hope everyone's having a good week.

A reminder from the CDC (Centers for Disease Control and Prevention): Keeping hands clean is one of the most important steps we can take to avoid getting sick and spreading germs to others.
20 comments:

Finally, it's Friday and this is how I feel. I'm not "in love" with someone, but Friday is the culmination of a week's worth of work and it's absolutely worth celebrating with a song. Here are the lyrics from "Friday I'm In Love" by The Cure. This song was used on the movie "50 First Dates."

A GREAT WEEKEND TO ALL!
20 comments:

Email ThisBlogThis!Share to TwitterShare to FacebookShare to Pinterest
Labels: the office

Of Bees, Beehives and Blanks

I've heard this saying before that when spring comes, the bees are up to their antics. I've been busy as a bee for the past few days. Yesterday, I was so exhausted and all I wanted to do was crawl to bed and sleep when I reached home. It's that time of year when my department hosts meetings and attend several out-of-town meetings.

While the work front is buzzing noisy like a beehive, I have decided to take a short vacation next month. I am headed to - - - - - - and - - - - - for a week (Quiz: Fill in the blanks). I am looking forward to this break and hopefully, get my lovely cousin to take a day-off and show me around the city. She works too much. I still have our annual meeting to get through, but it feels really good to have a vacation to look forward to.

Umbrellas everywhere available in various colors; there were pink, hot pink, black, blue, green, light green, sky blue, and the most eye-catching of all - a multi-colored striped umbrella twirled by a tall, slim, blonde, wearing a 4 inch Stilleto. She probably works in one of the high-rise buildings in the area. With a hint of embarassment, I looked at my flat, Naturalizer shoes. I shrugged off the shame, and whispered, "At least, I'm comfortable." The rain drenched everything from the glass windows to the pavements. In front of an Anglican church, a homeless woman covers her pushcart with a blanket. Then she cowers under a leafless tree to escape the rain. It was no use. On 13th street, a homeless man slumbers underneath a pile of cardboard makeshift his shoes were exposed - a pair of white Nike shoes and probably a size 9. I could smell the putrid smell of wasted food and urine. Where else would he go? There are no restrooms around.

The crosswalk at 14th was crowded. Someone's umbrella pushed mine and raindrops dripped on my coat. I stepped back, while a short-haired woman puffed her cigarette like there's no tomorrow. The disgusting smell of city streets and cigarette smoke is the worse combination of all especially on mornings I haven't had my breakfast yet. The crosswalk sign was taking too long. The lady puffed her cigarette and decided to jaywalk; she almost got hit by a cab. She looked at the cab driver sternly and continued walking; she owned 14th Street. The "walk" sign came through, and the pedestrians followed. I followed.

As I crossed another street to get to my office, I saw a glimpse of the White House on my left. I smelled the heavenly scent of coffee. If I'm not mistaken, it could be "Breakfast Blend." Across the street, the line for Starbucks was long. I went straight to the elevator, pushed 11, and relieved to be away from the rain and the busy streets of D.C. But then, it's time to put my game face on, because at 11th floor there lives office politics peppered with a cocky receptionist. Let the games begin!
19 comments:

Do women really mature earlier than men? Last night, I was watching the comedy show, 3rd Rock from the Sun, and I almost died with laughter when I heard this conversation between Dr. Albright and Nina (Dr. Albright's assistant), while watching Dr. Solomon make a fool of himself.

Dr. Albright: When does puberty end for a man?
Nina: Six months after death.
Happy Tuesday everyone!

Email ThisBlogThis!Share to TwitterShare to FacebookShare to Pinterest
Labels: dating and relationships

Thank You, Ma and Dad

Ma and Dad sent me a wonderful Easter surprise. My parents sent me a package. There were a couple of portuguese sausages, which I made sure to prepare for breakfast this Easter morning. The sweet smell of the sausage and the garlicky scent of my fried rice permeated my apartment. I felt so at home with the scent, as I often have this sausage for breakfast at home in Hawaii. 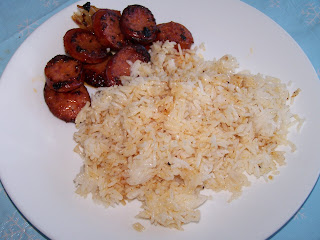 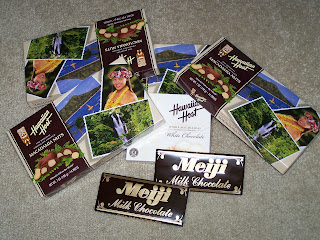 And of course, Mom knows her daughter's weakness - cute, writing papers. I miss Hawaii so much right now, and even if some relatives are proving difficult to deal with, I am so lucky to have wonderful, supportive parents. Mahalo. I am so happy I have you both in my life.
I miss you and love you.

Email ThisBlogThis!Share to TwitterShare to FacebookShare to Pinterest
Labels: family

The Cherry Blossoms are in full bloom and all sorts of flowers are springing to life. It's spring time in beautiful Maryland, and it is also the perfect time for home owners to think and plan about home remodeling. I know this because people I know in the area are starting to lay out their plans to improve their abode. If you are also looking into remodeling your home or in need of having work done around the house such as as replacing your windows and roofs, then Baltimore Remodeling got your needs covered. Baltimore Remodeling will work with you to build your home, meet your dreams and your family needs. Whether you are looking into large remodeling projects from complete kitchen remodeling to the addition of several rooms, Baltimore Remodeling will help your dream home come true.

What I love about their website is that it is easy to navigate and it is consumer friendly. If you have a question for them, feel free to call or leave a message at their Request Information section. I know undertaking remodeling projects could get stressful especially on the planning and budget concerns, so take control by doing your own research and contact Baltimore Remodeling and make any home improvement job a smooth process.
No comments: 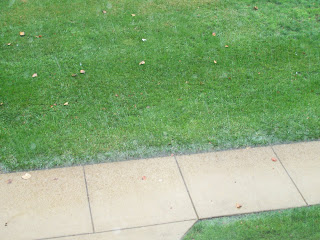 I woke up to a rainy Saturday, but I didn't let the raindrops deter my trip to the grocery store. Purposely leaving my umbrella behind, I felt every raindrop on my face, while I enjoyed jumping on puddles and smiling every time I hear a splash. I live for days like this. When it rains and everyone seems to run for shelter, I stand still and enjoy the touch, sound, and smell of rain. Because it is my time to be free, careless, and just be myself. The rain has a therapeutic effect on me. Specially on days when work is too demanding, family is causing too much stress, and life isn't turning out the way I planned. When it rains, I see the sky reaching out to meet the earth. It gives me hope that even though my life is getting chaotic and my aspirations seem to be out-of-reach, maybe - just maybe, my dreams will reach out to meet me.
14 comments:

Last week, I managed to walk around DC and my neighborhood. I thought it was time to take some photos since blooming flowers abound. I couldn't afford to miss this opportunity. So here are a few of my favorite photos. I hope you enjoy them, as I had a wonderful time taking these photos. 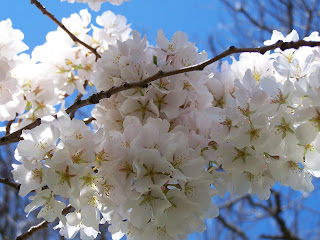 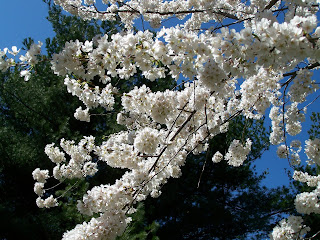 Fairest of them all 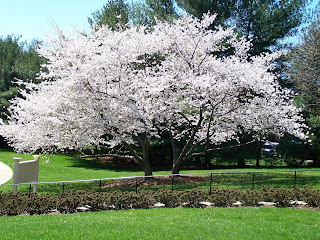 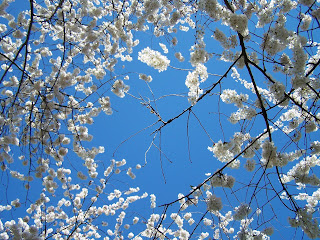 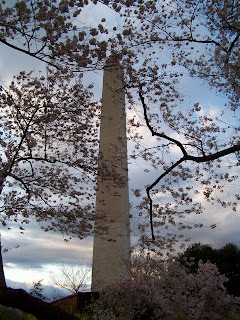 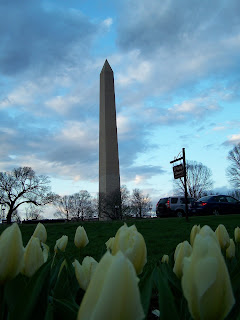 A blessed Easter to all! 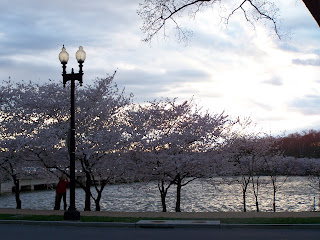 The sun was starting to set when I took this. 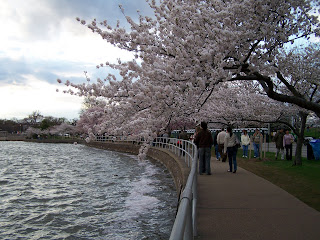 It's best to visit in the evening as there are less visitors. 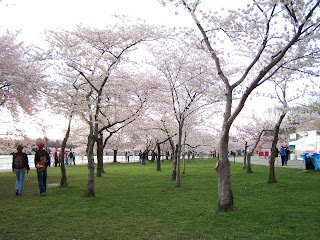 A perfect place to have a picnic. 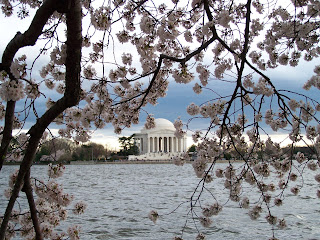 According to the park guide, "the Japanese believe cherry blossoms are best experienced when a temple complements the scene. The Jefferson Memorial serves this function." 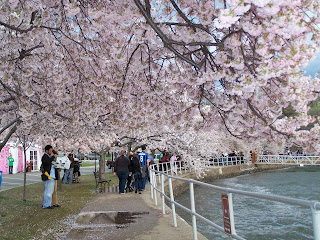 The flowers this year were absolutely breathtaking and beautiful. I wish they'd last for the whole year, but such are the cherry blossoms - that bloom only once a year.

The Other Shoe Fell

The Cherry Blossoms are at peak bloom. After work on Friday, I took the Metro to the Tidal Basin and enjoyed a relaxing walk underneath the flowers. No matter how many times I've seen them, the Cherry Blossoms never cease to amaze me. They're so beautiful. I stayed at the park until sunset and picked a nice spot looking straight at the Jefferson Memorial. The Cherry Blossoms ruffled with the breeze, while the waves of the Potomac undulated and danced. I was mesmerized. 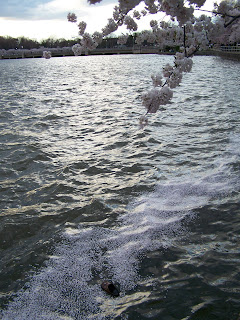 From such a poetic and contemplative state, my focus was snagged with the sight of this floating shoe amongst the fallen petals. I couldn't help but smile and felt bad for the person who lost it. While I was taking this photo (below), a lady came and took a photo as well. She later told me that it is her husband's. We both laughed. 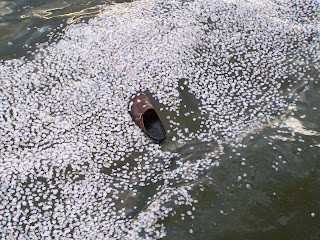 The floating shoe reminded me of a Seinfeld episode - The Soul Mate. If you're a Seinfeld fan, I think you'll remember this conversation between Kramer and Pam.

KRAMER: Human. It's...human to be moved by a fragrance.
PAM: That's so true.
KRAMER: Her bouquet cleaved his hardened...
NEWMAN: Shell.
KRAMER: ...shell. And fondled his muscled heart. He embibed her glistening spell...just before the other shoe...fell.

"Our deepest fear is not that we are inadequate. Our deepest fear is that we are powerful beyond measure. It is our light, not our darkness, that most frightens us. Your playing small does not serve the world. There is nothing enlightened about shrinking so that other people won't feel insecure around you. We are all meant to shine as children do. It's not just in some of us; it is in everyone. And as we let our own lights shine, we unconsciously give other people permission to do the same. As we are liberated from our own fear, our presence automatically liberates others." (Nelson Mandela)
9 comments: