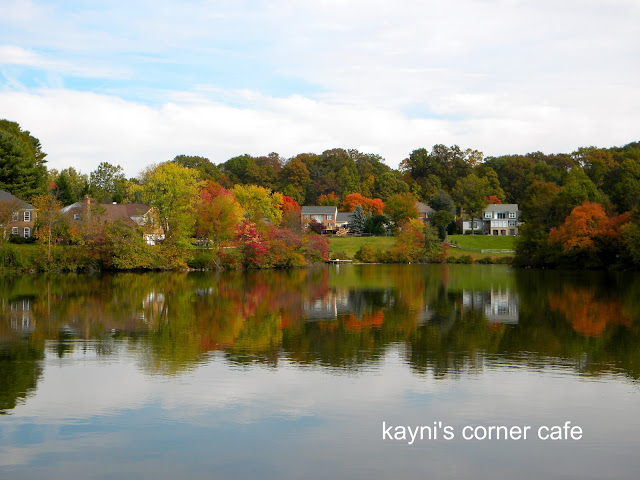 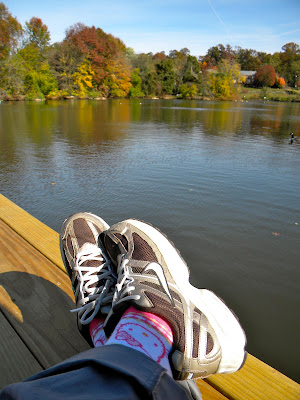 I think the warmer weather is getting to me. Summer after all is around the corner and I heard this will be a balmy and warm week. I guess summer's just getting started.

Work's busier than usual due to a big meeting this week; I think I'll be able to breathe once it's over. Also, house and garden work is keeping me busy during the weekends. Whatever time left, I try to spend on "me" time. Basically, blogging has taken the backseat. So today, I think an update in bullets will suffice.

I am looking forward to getting my copy of Expat Women: Confessions – 50 Answers to Your Real-Life Questions about Living Abroad because I am interested and excited to read about the lives and insights of other expat women like me. When we first moved to the US, my family and I didn't have any clue what awaited us. We went through a LOT of adjustment and I have to admit that living far from home could be challenging as well as rewarding. Living abroad taught me that no matter where you are or where you go, you carry home in your heart. Now, I'm interested to read what other expat women think too.

This book was officially launched on May 5th, and I think this is a great read for expat women and to those planning to live the life of an expat as well. This book provides an opportunity to learn from their stories and their experiences. Actually, even if you're not an expat or not planning to become one, this book will provide a true-to-life insight to the life of expat women.

Also, if you'd like a chance to share in prizes valued at US$5,000, including expat/career coaching sessions, a Kindle, Amazon vouchers and more, please check information on how to join here.  The deadline for the competition is May 31st.

This book is available for purchase here. Below is a Book Synopsis in case you're interested to read it too:


In Expat Women: Confessions - 50 Answers to Your Real-Life Questions about Living Abroad, experienced expats Andrea Martins and Victoria Hepworth share a wealth of wisdom and positive tips to motivate expats at every stage of their journey. They cover popular topics like leaving family back home, transitioning quickly, intercultural relationships, parenting bilingual children and work-life balance. They also address more difficult issues such as expat infidelity, divorce, alcoholism and reverse culture shock. We believe that our unique book is the perfect addition to any expat bookshelf. (Source here.)

Email ThisBlogThis!Share to TwitterShare to FacebookShare to Pinterest
Labels: books 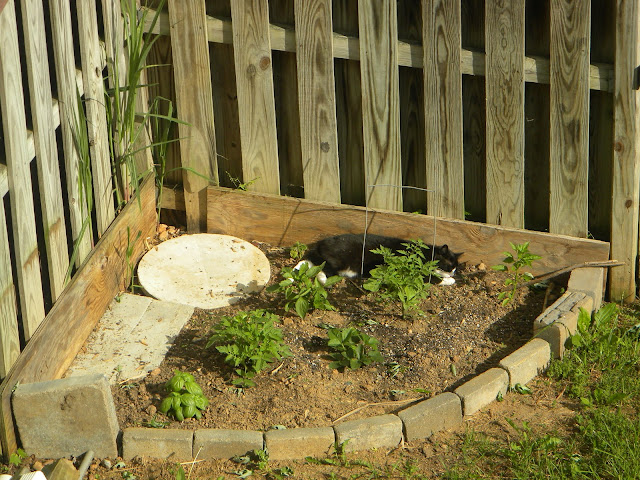 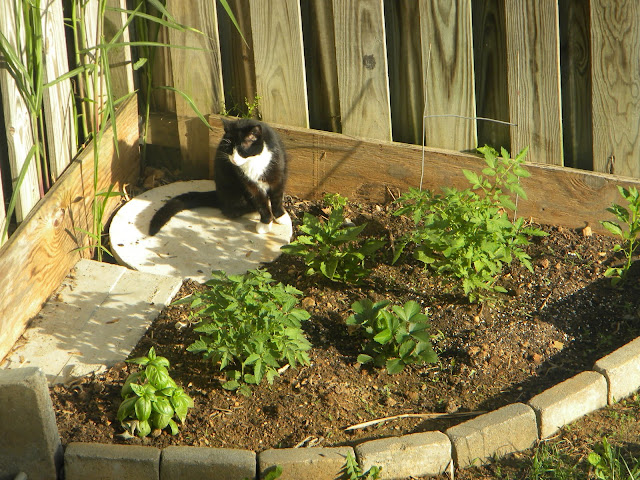 Sometimes, I see her always on the look-out as if guarding my vegetables from something. She does a great job scaring the birds and squirrels from eating or digging my plants.
20 comments:

In a couple of weeks, it will be June. Soon, the balmy and sweaty nights of summer will be here again. I am hoping that this year's summer won't be as hot as the summer of 2010, where we had about 52 days that were in the 90 degrees or higher. As this summer approaches, I've been thinking a lot of how I've spent my summers when I was younger. How about you? Do you have any good memories of your past summers?

This photo was taken at my front garden last year. I had about five Sunflowers all blooming at the same time. I borrowed this quote from here.

When I was a kid, summers were spent:
I really enjoyed my summers in the Philippines, and I feel so lucky to have such wonderful memories. Now, it's time to make another memorable summer. Cheers to a fun filled summer!

I'm not a fan of Sunday evenings. I think the number one reason is that - I don't like the idea of going to work tomorrow. So here I am using blogging as a way to de-stress and organize my brain for the work week: 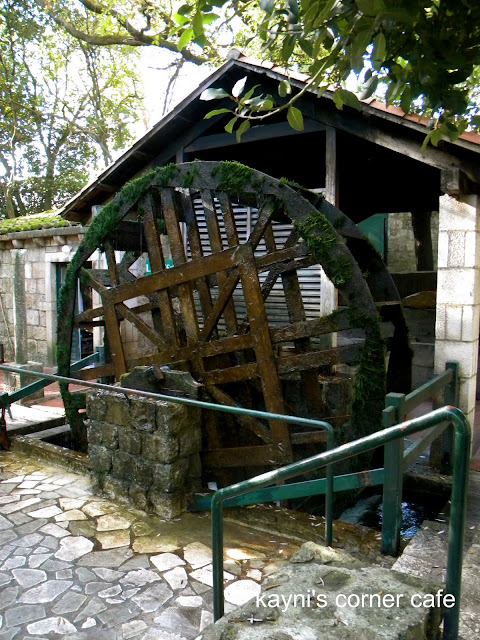 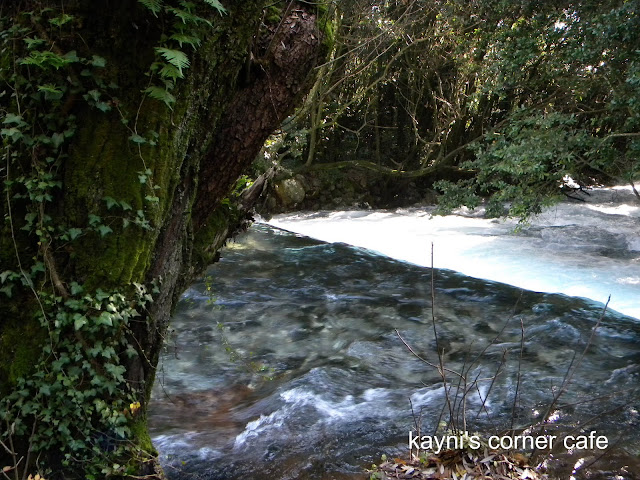 Ang puwersa ng ilog Ljuta ang nagpapatakbo sa waterwheel na nakita namin sa Konavle. Ang ilog na ito ay protektado ng gobyerno kaya't itoy napakalinis.
This is the source of power for the waterwheel in Konavle, the Ljuta River. This is a government protected river and is one of the cleanest rivers I've ever seen. 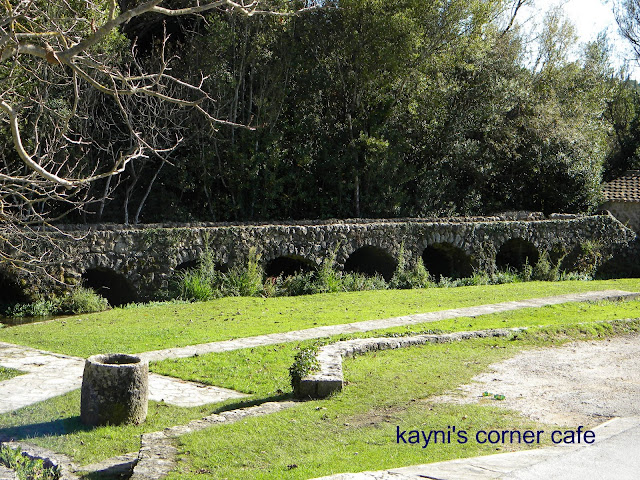 While visiting Achilleion, there were three things that I consider memorable and striking during my visit: (1) statues - especially of Achilles and Sissy; (2) fresco of The Triumph of Achilles; and, (3) the palace interior.

One of the most dramatic statues I've seen during this visit, is this interpretation of the dying Achilles. 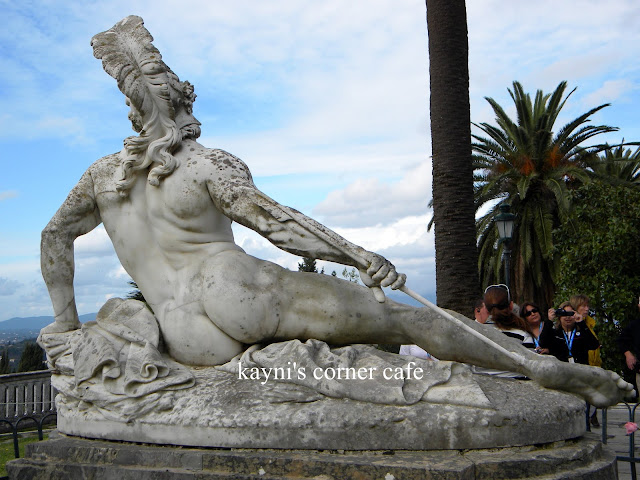 This statue was created by Ernst Herter in 1884, Achilles Dying. 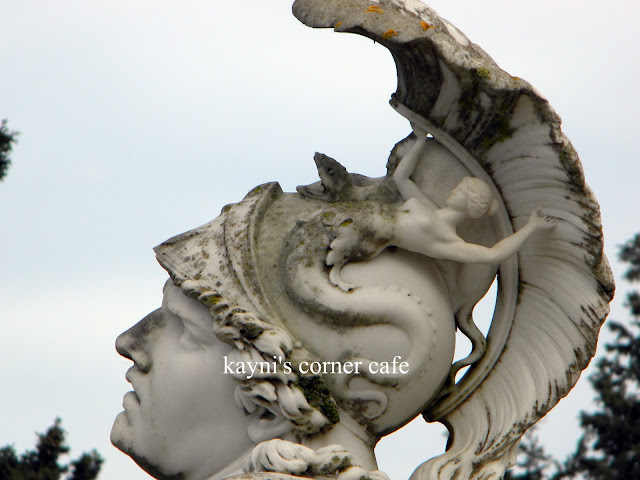 A closer look at Achilles' helmet. 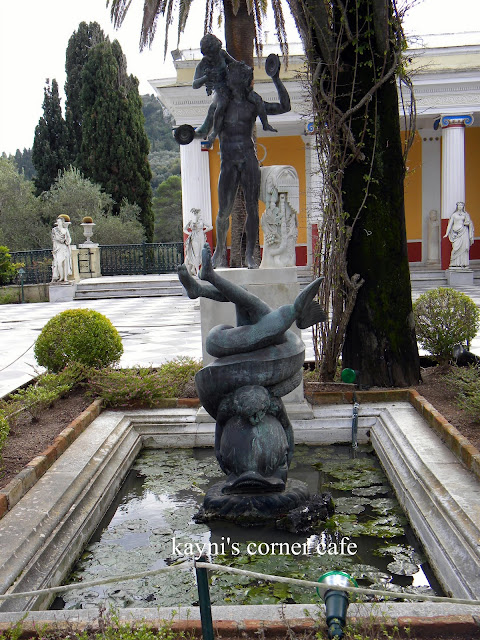 Another interesting statue at the palace pond. 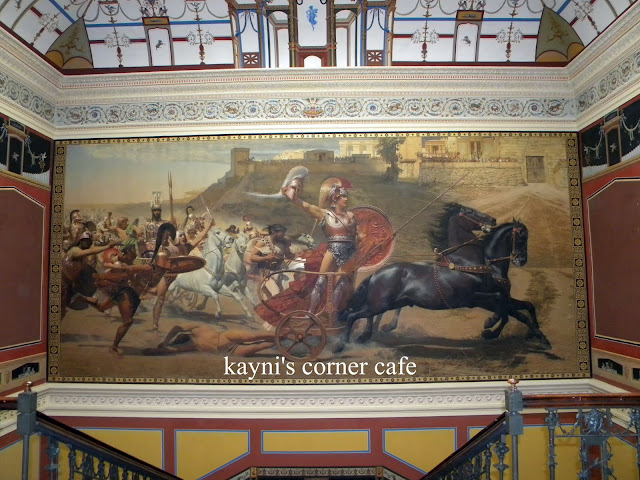 The original painting on canvas was by Franz Matsch, an Austrian artist. This painting which can be viewed at the palace is called The Triumph of Achilles. It depicts the mighty yet angelic Achilles dragging the body of Hector around the walls of Troy at the back of his chariot. This is Matsch own interpretation of an episode from Homer's The Iliad. 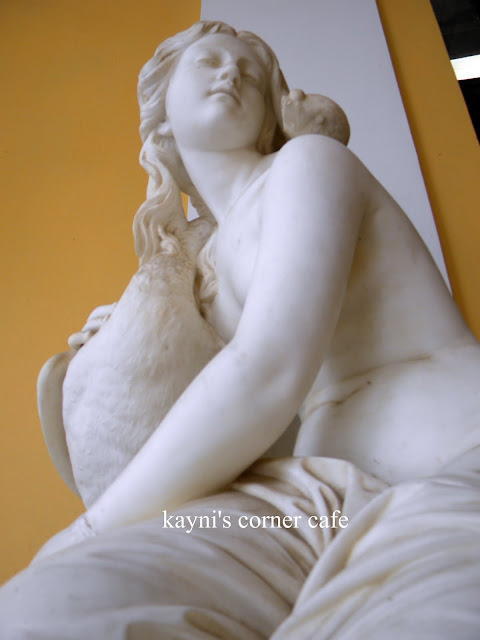 I love how the statues are so life-like especially their facial expressions. 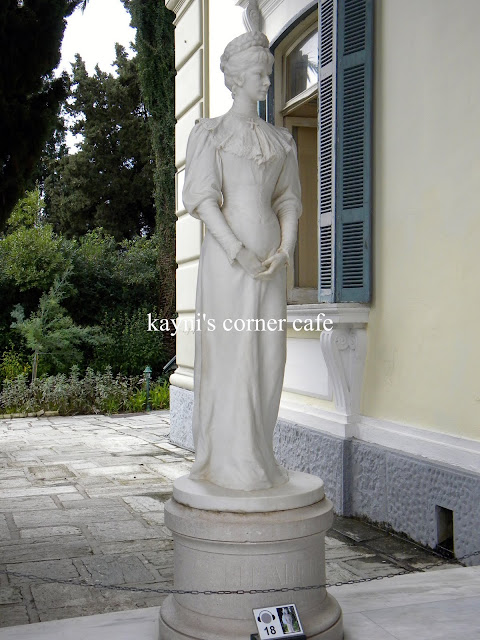 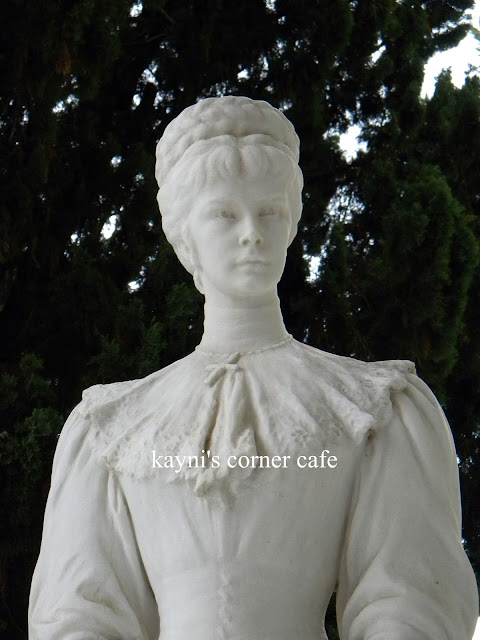 Yes, it is that time of year when Tulips take the center stage. I LOVE Tulips and judging from the different varieties available out there, they look like pixies in multi-colored sundresses. Last weekend, we were at the Hershey Gardens to witness the blooming of over 45,000 Tulips.

Sadly, we only had 30 minutes to take photos at the garden. Apparently, they were hosting a Biergarten that day and they were closing the garden for the event. Although I was disappointed and sad that I couldn't stay longer to enjoy the Tulips, my heart lighted up when I saw the gardens draped in colorful, fully bloomed Tulips. I did observe that the blooms last year were more robust. This is probably because we've gotten a lot of rain this spring.

Nevertheless, here are the Tulips of Hershey Gardens, Pennsylvania. 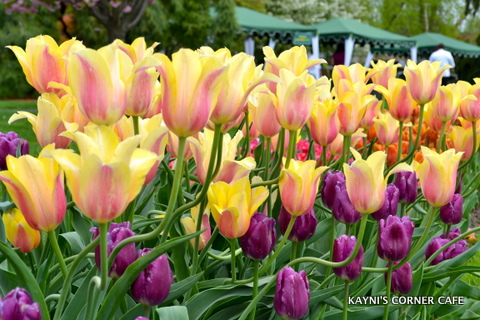 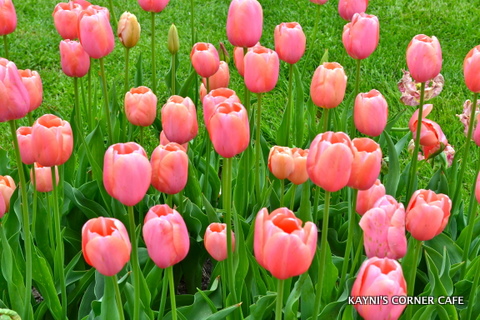 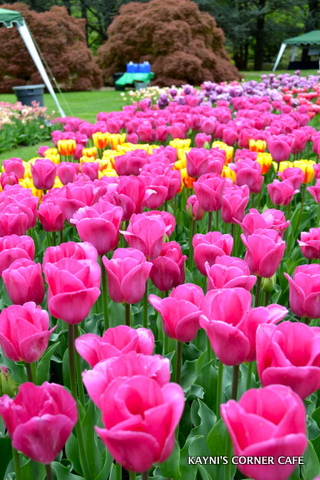 These purple Tulips are the hardest ones to take photos of. They have a certain glare whenever I take a shot. 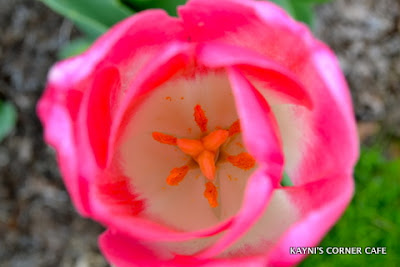 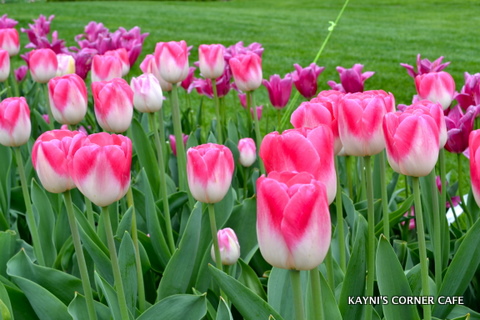 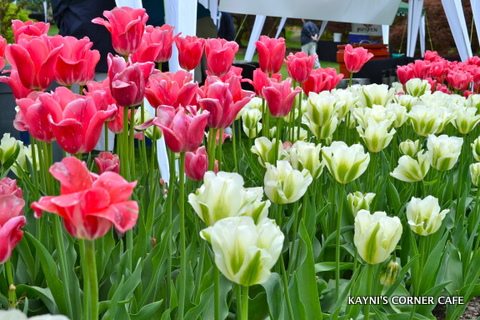 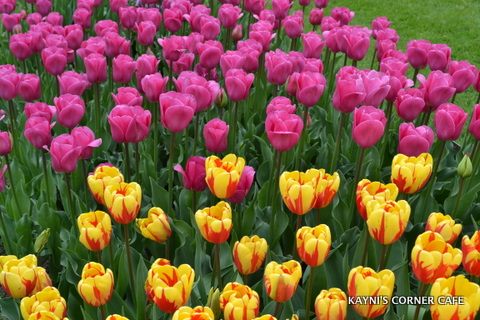 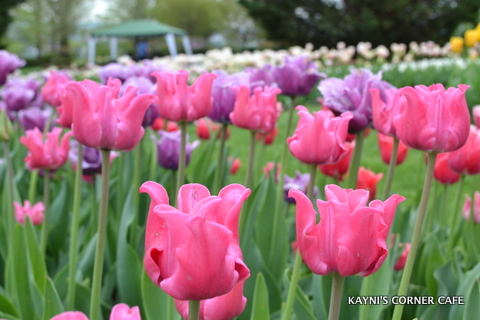 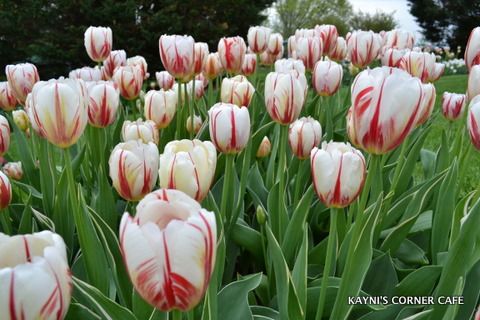 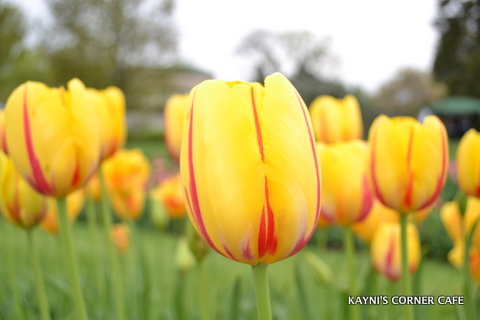 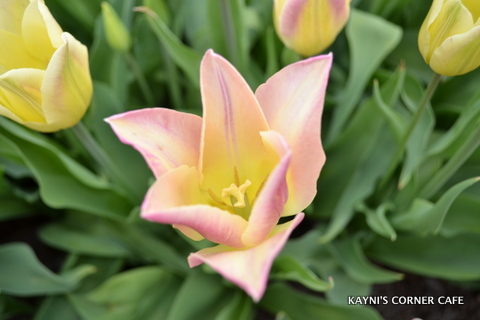 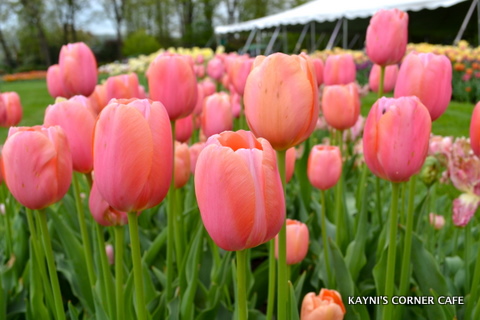 Happy Mother's Day to all wonderful mothers in the world!
These Tulips are for you.
8 comments:

Riding With The Pacman

Yesterday was another busy morning commute to DC. Sometimes, I wonder where I get my strength and patience to get up every single work day and deal with I-270 traffic plus the packed trains just to get to work. During my 45-minute train ride, I usually keep busy with a book or scan through the pages of the Express but yesterday morning I had a nagging headache, so I decided to take a power nap instead. I dozed off for a few minutes and was woken up with the rustling of newspaper pages. I opened my eyes and saw ....

A DC Metro rider reading about Manny Pacquiao from The Wall Street Journal.

I had a smile on my face seeing a huge photo of Manny on The Wall Street Journal. I wanted to grab the newspaper from this guy but I exercised restraint. Whenever I see Filipinos succeeding, I get a great boost of Filipino pride. So after getting off my stop, I hurriedly walked to my office and grabbed the office's Wall Street Journal. I dismissed the depressing front headlines and went straight to the sports page.

Here are some quotes:

The Fight of the Physical Outlier: Manny Pacquiao's Conditioning, and His Ability to Win Across Weight Classes, Confounds Experts

The enduring mystery is how he has managed to win titles in a record eight weight classes, from flyweight (112-pound limit) to light-middleweight (154-pound limit). Unlike any fighter in history, he has packed on the pounds without surrendering his searing speed and pulverizing power. While Pacquiao's fitness isn't completely off the charts in any of one category, he has been able to gain weight without sacrificing of his fistic skills.

"Manny is on the level of the most conditioned athletes in the world," the trainer [Roach] said. "He's a phenomenon."

"Sure, Manny is fast and hits hard, but the thing that is special with him is his intensity," says his sparring partner Shawn Porter. "It is electric in there. He is always pushing the pace."

In the end, Roach believes Mosley has a hard time with fast opponents who won't come right at him. He's confident that his magnificently conditioned, hard punching fighter will be the first to register a "loss by KO" on Mosley's long ledger.

All the best to the Pacman!

The last stop of our Mediterranean cruise was Corfu. As our bus zipped through the island's towns and villages, I was taken aback of how rundown-looking some of the villages were. Also, driving there seems to be like a sport. Our bus encountered motorists who narrowly tried to overtake us in certain uphill turns. It was both amusing and nerve-wracking to witness such occurrences; this was after all, how they do it in Corfu. For me, it was all part of experiencing Corfu's island style.
That day, our bus was taking us to Gastouri to visit the Achilleion Palace. It was a relaxing drive as we passed through orchards of oranges and olives. We even saw tourists who randomly stopped at a nearby orchard to pick olives who were drooping outside some fence. I secretly wished we could do that too.
According to our tour guide, Achilleion Palace was built in 1890 as a summer retreat for Elizabeth also called "Sissy," the Empress of Austria. Unfortunately, Empress Elizabeth was assassinated in 1898 in Geneva and the palace was then deserted until 1907 when it was bought by Kaiser Wilhelm II of Germany.  The palace is impressive and classical in design. As we walked the palace grounds, I was taken by the statues that adorned the palace and of course, the breathtaking view of Corfu's Coast visible from the garden grounds.

View upon entering the Palace gates.

A statue of an athlete.

Achilles overlooking the coast of Corfu.

A statue of a maiden at the Palace gardens.

I think this is a statue of Mercury.

Another statue at the Palace's roof.
The next photos were taken from the Palace gardens overlooking the coast. I think these views make the Palace a perfect summer retreat.

When we visited, it was very quiet and the weather was mild and cool. I also noticed that the Palace was perfectly situated to have an unobstructed view of the picturesque town of Corfu.
Next, I'll post interior photos of the Palace.
8 comments: